Skip to main content
My debut novel With the Music available as signed paperback or ebook
Buy it!

This prologue is from 2015. I have since scrapped the prologue but incorporated elements into the first chapter, but I thought I'd keep it here as a sample of how the book's progressed.

Okay, close your eyes and breathe out slowly…

It’s a cicada-noisy summer night, and I’m at an adults’ party. I like adults’ parties better than kids’ parties, because even though they don’t have chocolate crackles, there are no other kids to take all of the attention away from me. I’m having a relax away from Jack who isn’t at this party, thank goodness, because he’s a boof-headed little pest. Someone gives me a lolly in the shape of teeth. I put it in front of my real teeth so it looks like I have big, white film-star teeth and fairy-pink gums.

My parents tell me that they go to parties because they are young, and want to enjoy themselves and not have a boring life just because they have kids. Sometimes me and Jack come to the parties too, but this time it’s just me. Plus it’s good for us to learn that there are more things to do with your life than sitting at home eating steak and three veg all day long.

Dad says I can stay in the telly room or take a nap in the bedroom, but I don’t want to be by myself; I want to be in the garden with everyone else, so I go outside showing my lolly teeth to all the adults who give me their most twinkly party smiles.

It’s not a rowdy party. Everyone is quietly chattering and happy, and the air makes me feel safe, like being wrapped in a warm blanket that smells of flowers. We sit outside in the dark. People are talking and listening to a black and silver ghetto blaster covered in spots of spilt paint. After every few songs a whispery voice on the radio says “EON FM!” and then they play some more songs by Split Ends and Fleetwood Max. Even without looking inside the house I know there’s a bath somewhere in there full of ice and longnecks of VB and maybe a bottle of Coke. Usually there’s no kids’ drinks at adults’ parties so I have to drink water or milky tea. I’m not allowed to drink Coke because it’ll rot my teeth and guts and brains. We’re at a place far, far away from my home, called the Dandelion Mountains. In the daytime there’s lots of little green frogs here, as well as red mushrooms and fat gumnut babies who live under the ferns and dance and eat cake on the moss.

The people whose party this is are a man and a lady, both with long hair and no fringe, like Dad used to have before I was born. Mum calls that type of hairstyle a bum-part because the part is a line all the way down the middle of your hair and it looks like a bum-crack. She says men with that hairstyle are gormless so she made Dad get his hair cut when they got married.

We’re all sitting in a gypsy camp garden. There’s plants in pots, a fire burning inside an old washing machine, and big cushions and rugs everywhere. There’s vegie patches with all sorts of vegies growing and a flippy-floppy scarecrow protecting them. I can see sweet corn, carrots, mint and yucky pumpkin.

I’m sitting with my legs crossed on some cushions talking to a man. It’s too dark to see his face but I can make out his shape beside the orange firelight. He’s tall and thin, but not thin like a stick, and his hair is a bit spiky on top. The main thing I like about this man is the sound of his voice. It’s not a kid’s voice or a teenager’s voice or an old dad-man voice. He has a kind voice, and he talks slow, not like he’s dumb but like he’s thinking about things. He doesn’t talk to me in that annoying, loud Play School voice lots of adults use for kids. We’re talking about music. I tell him I like Blondie because she has blonde hair and so do I. I like how her music sounds like disco and rock and roll all mixed up together. I like the song about glass hearts because it’s soft like hearts, and sharp like glass, all at the same time. The man says that he likes Blondie too, but his favourite band is The Clash because they sing about very important stuff. I agree with the man that it’s time for funny Beatle maniacs to go away and make room for something new. We talk and talk and talk; and I can tell by the sound of his voice that he’s a good man who knows a lot of things.

When I wake up the next morning I remember that I liked talking to that man. I try hard to remember more things about him, but I can’t. I miss him. 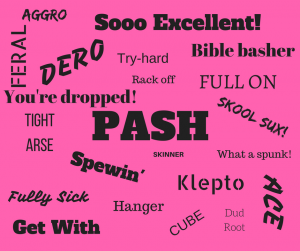 The following gems come from my experience growing up in Melbourne's south east suburbs during the late 80s and early 90s. It's 1989 when the narrator of With the Music is 14, so she would have used these expressions to death. Please share your own memories in the comments.

Aggro: to be in a bad mood. Dad was real aggro that Yola got suspended for smoking.

Bag: to talk disrespectfully about a person. Kathleen told me to stop bagging Bert Newton because he's actually a very witty and informative man.

Bible basher: religious people. Some of the boys at Julia's youth group are spunks, but they're all bible bashers.

Bush pig: an uncultured person, resident of the outer suburbs or country Victoria. Lucy has become such a bush pig since she moved to Ringwood.

Cube: a boring person, usually an adult who is so square they resemble six squares stuck together. Mum is such a cube, she won't buy me any Island Coolers.

Dero: short for derelict, someone who's rough. State school boys are such deros.

Drop: to break up with someone. Courtney dropped Con because he didn't have his own car.

Dud root: someone who's bad in bed. Melanie was never sleeping with Todd again; he was such a dud root.

Feral: disgusting and/or unpleasant. Tricia is so feral; she doesn't use Impulse and she listens to Simply Red.

Full on: extreme. Jimmy is a full on bogan; he lives in Laverton and goes to a state school.

Fully sick c*nt: a young male who is considered cool, but a trifle flashy and overly fond of cars. Jason is a fully sick c*nt; he has his drivers licence.

Get with / get on with (past tense is "got"): to kiss someone. I think it was around 1988 when "pash" was replaced by "get with" and you were a pariah if you still used the word "pash". Marilyn got with three boys at the blue light disco.

Go with: to date someone, be it for a day, a week or even longer. Charlene is going with Scott.

Hanger: a boring kid who follows you around, they were leechlike and "hung off" a group of popular kids. Simone hangs off us all the time and she never has any good stories about boys.

Klepto: short for kleptomaniac, someone who steals things, can also be used as a verb. Tiffany kelptoed my Bros pencil case.

Mole: a girl who was considered a bitch, the plural being mole patrol. Becky didn't want to go to the blue light disco because she hated running into that mole patrol from the Catholic school.

Palm: to break up with someone. Tara was turning into a clingy mole, so Will palmed her.

Rack off: expression used to tell someone to go away. Rack off, Stacey, you're such a hanger!

Rage: used as a noun or a verb, to party. The after party was a real rage. We raged all night at the after party.

Schitz out: to unexpectedly lose your temper. Mum schitzed out because I got orange Twistie crumbs all over my blazer.

Scrag fight: a physical fight between two girls. Bianca and Marilyn got into a scrag fight after Bianca got with Marilyn's boyfriend.

Skeg: a cool boy into surfing or skate boarding, normally dressed in fluoro board shorts. Angus is such a skeg; I love him sooo much!

Skinner: a younger kid, named so because of their lack of pubes (people had pubes in the 80s). Abbie is going with that little skinner in Year Seven.

So excellent: very good. It was so excellent that Tara got detention cos she's a real mole.

Spewing: feeling disappointed. Gita was spewing she didn't get tickets to the Boom Crash Opera concert.

Splendo: posh, probably owns a yacht. The boys at Scotch College are such splendos.

Spunk: a handsome male. George Michael is such a spunk!

Tight arse: a person who places restrictions on your fun, or doesn't give you money. Dad is such a tight arse; he said I have to get up before eleven am even on the weekend. I need $50 to buy some clothes from Cherry Lane but my tight arse parents won't give it to me.

Try hard: an unpopular kid who tries too hard to impress. Look at Kim in those try hard fake Converse from K-Mart.