For over two years, I had the honour to be involved in a project to put together a book to commemorate PBS 106.7FM’s 40th anniversary since they commenced licensed broadcasting. The book launch took place in November 2019 as part of Melbourne Music Week.

We applied for grants to fund the book’s production and reached out to the PBS community to gather photos, posters, anecdotes etc. Much of this memorabilia was rare and previously unseen. This book is a historical document chronicling PBS’ significant contribution to the Melbourne music scene. I’m super proud to have been involved in its creation and to have met so many amazing people who have been involved with PBS over the past 40+ years.

You can purchase your copy here. 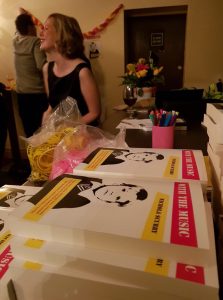 After an amazing book launch, I’m excited to announce that With the Music is finally available to purchase in paperback (signed copy) or ebook format. You can get your copy here.

Here I am at the police station. I sit in a chair, swinging my feet and wondering if they’ll ever be able to reach the ground.

‘Hi!’ I say when Mum arrives. She gives me a hug so tight, it makes me pant when I talk. ‘A lady with a Chihuahua found me. He’s a little dog from Mexico that yaps and nips and shivers. Can we get one? Pleeease?’

Mum ignores my question. ‘Dot Kelly! Your father and I have been frantic! Frantic! Do not wander off, ever again!’

The police are looking at me and laughing, even though I didn’t do anything funny.

‘You should’ve kept a better eye on me!’ I tell Mum.

‘What did you think you were doing?’

‘I was bored, so I went to look for records. Can I have a record?’

I already have one record. The cover is yellow with a picture of teenagers listening to music. The man at the party gave it to me. He said it came all the way from England. The song tells funny Beatle maniacs to go away because an ice age is coming. The man told me to look after the record because it’s the future. The future’s bright, he said. I keep the record hidden between my mattress and bed. It’s my treasure.

Mum grabs my hand and pulls me out of the police station and down Malvern Road. We’re both stomping.

‘You should be happy to see me!’ I say. ‘Next time, I’ll stay with that lady and her Chihuahua forever. I’ll name him Jason, teach him tricks and we can join the Young Talent Team.’

We march home. Mum’s not listening to me. I mutter to myself anyway. I’m mad at her and I’m imagining how nice it would be to join the Young Talent Team.

‘You can sit at home and drink your dumb tea and you’ll see me on telly, in my sparkly costume, singing with Tina Arena. I’ll be famous and everyone will want to talk to me. But I won’t talk to you. And then I’ll stop having that annoying dream about Major Tom’s capsule.’

I stop talking. I remember that my dream is a secret, my first secret. In the dream, I’m floating through space in a capsule. No people, no music, just me by myself, forever and ever. My stomach is a rock on mornings after I have that dream. I pretend this secret dream is a piece of paper with a rude drawing on it, fold it up tight and put it away.

Mum is walking fast, so I trot to catch up.

I stand outside, looking at our house. The paint is peely and the roof isn’t straight. Dad has planted some flowers, but weeds are growing too. When I stare long enough, the shapes of the window, porch and roof make a face that’s smiling at me. All the houses in Prahran look the same. I like them.

I liked the place where that party was, too. It was far, far away; somewhere called the Dandelion Mountains. There are lots of little green frogs there, red mushrooms and fat gumnut babies, who live under the ferns and dance and eat cake on the moss.

‘You, go straight to your room,’ Mum says, as she unlocks the front door. ‘Have a good, long think about being more careful in the future.’

‘The future’s bright!’ I shout, but Mum has already disappeared down the hallway.

I stomp into my room and half-shut, half-slam the door. Obviously Mum’s forgotten it’s the Year of the Child, so I sing the ‘Care for Kids’ song as loud as I can.

When I’m tired of singing, I lie on my bed and have a think. Maybe this isn’t my real family. I could be a kidnapped princess. Maybe there was another girl at the hospital, a girl with brown hair and mud eyes, like the rest of the Kellys. Grandma says they’re the emerald green eyes of Ireland, but they look like mud to me. Maybe a prince and princess were hiding from KAOS agents, so they had no choice but to swap their pale baby with that other girl. This could explain why I have that dream no one else does.

Mum comes into my room, and gives me a hug and a kiss, and tells me she was only angry because she was really, really worried about me. She loves me so much that if anything ever happened to me, she wouldn’t know what to do. Then she sings me a song about a dusty lady who doesn’t know what to do with herself. Mum isn’t very good at singing.

I would like to acknowledge the Wurundjeri people of the Kulin nation as the traditional owners of the land upon which I live and work. I pay respect to their Elders past, present and future, and extend that respect to other Aboriginal and Torres Strait Islander people.